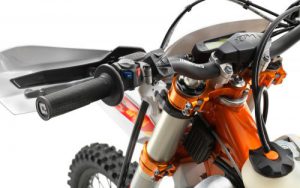 Any off-road rider or racer would be familiar with the popular Orange machines dominating the dirt bike scene. Let’s look back at some of the highlights of KTM’s dirt bike history.

KTM is one of the 5 leading motorcycle manufacturers in the world and is constantly on the cutting edge of technology. All through KTM dirt bike history, racing has always been the testing ground for technology advances in production bikes.

The Austrian company had humble beginnings as a repair shop in Mattighofen, opened by Hans Trunkenpolz in 1934. His shop was known as Kraftfahrzeug Trunkenpolz Mattighofen, but the name was unregistered. In 1937 they became the official supplier of DKW motorcycles.

The company survived during the second world war doing diesel repairs for the military. Hans was called up for military service and his wife Elizabeth managed the business till 1943.

After the war, only a few people could afford a car, so Trunkenpolz started producing his own motorcycles and the first prototype was the R100 built in 1951. 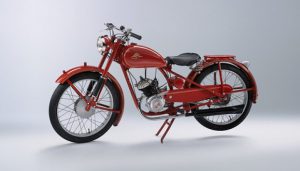 Most of the components were produced in-house, except for the engine, which was a 98cc Rotax made by Fichtel & Sachs.

In 1953 serial production started with just three bikes per day, with twenty employees.
Businessman and racing enthusiast Ernst Kronreif became a sizable shareholder in 1953 and the company was renamed and registered as Kronreif & Trunkenpolz Mattighofen. KTM after the two owners’ names and the town where it began.

A KTM bike won its first national championship, the Austrian 125cc in 1954.
In 1956 KTM made its first appearance at the International Six Days Trials (ISDT as it was known then) ridden by Egon Dornauer and won a gold medal.

Racing has always been a testing ground for technology at KTM.

The bikes were first brought to America by importer John Penton in 1968 under the Penton name.

The Seventies To Nineties

The GS125 was the first KTM to be imported into America. Their success in US motocross led to the opening of KTM America Inc. established in Lorain in 1978.

By 1971 the workforce totaled 400 and KTM was building 42 different models.

KTM has always been a leader in innovation, with the best parts available fitted standard to machines.

They followed this up with a liquid-cooled four-stroke in 1982 and became the first manufacturer to produce an MX bike with front and rear disc brakes in 1986.

The hydraulic clutch was also a KTM feature, with its light action helping to reduce arm pump during racing.

With the current domination of four strokes in motocross and supercross, KTM is one of the only manufacturers to continue producing two-stroke dirt bikes, and leading the way in making them more environmentally friendly and cleaner burning.

The nineties saw the introduction of the linkless PDS rear suspension on two-stroke models.

In 1995 KTM bought out Swedish manufacturer Husaberg and in 2013 also bought Husqvarna (then owned by BMW) which is why you’ll see similarities in the three brands. Husaberg is no longer in existence, with the technology being absorbed into Husqvarna.

In 1996 the motocross bikes were first produced in the now-signature Orange color, and the following year saw the introduction of the LC4 Supermoto and adventure motorcycles.

Competition Success In The 2000s

In 2006 Marc Coma wins the Dakar and KTM riders take the top eight spots and win all but one stage of the Dakar.

In 2010 KTM wins all motocross World Championship titles, never achieved before by any manufacturer.

In 2015, Marc Coma wins his fifth Dakar, and Australian Toby Price finishes in third place on his first attempt. 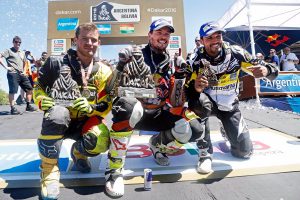 To date, KTM has won more than 270 world championship titles in Moto 3, Motocross, Enduro, and many more.

KTM is now the largest European manufacturer of motorcycles with annual revenue of more than 1.1 Billion Euros. KTM has a dirt bike history and racing record to be proud of.

For More on the Dakar Rally: Famous Dirt Bike Events

For handy tips to set up your bike: Dirt Bike Setup Tips

Have you ever owned a KTM? What’s your favorite bike? Please feel free to leave your thoughts in the comments below.