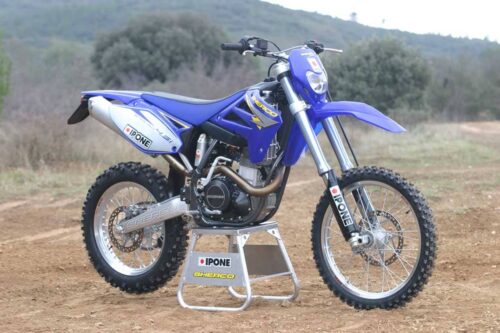 Sherco is a relatively young French and Spanish motorcycle brand best known for its Trials bikes, but they also produce Enduro and Supermoto bikes. This look back at Sherco dirt bike history will give you an understanding of where they came from, cover some of its competition success over the years, and look at where they are today.

The Sherco name is an amalgamation of two other brand names, Bultaco and Sherpa, and links back to the company’s origins.

Sherco is a family-owned company, founded in 1998 by Marc Teissier and Andreu Codina, both former Trials riders.

Marc Teissier was also a founder of Scorpa motorcycles, which was initially Bultaco Sherco. Teissier had purchased the rights to Bultaco.

The company has two factories. The first was established in Caldes de Montbui, Spain in 1998, where the Trials bikes are manufactured.

The second factory was established in Nîmes, France in 2002, and is where the Enduro and Supermoto bikes are manufactured. It is the only French motorcycle brand that is still active.

The brand is sold on 5 continents in over 74 countries around the world.

Sherco believes competition is the true test of the bike’s quality and has riders competing in Trials, Extreme Enduro, GNCC enduro events, and even the Dakar Rally.

Highlights Through The Years

A new factory was created in the French town of Nîmes. The 3,500 square meter facility has an R & D team focusing on the continuous improvement of the Enduro and Supermotard range.

2004: Sherco becomes the first manufacturer to produce a range of 2-stroke and 4-stroke Trials bikes. In the same year, Sherco produced the first electronically-controlled fuel-injected enduro bikes, the 450cc and 510cc 4T.

The Sherco R, a commercially available version of Albert Cabestany’s works machine was made available in 2.9 (2-stroke) and 3.2 (4-stroke) models.

That same year Sherco became the first manufacturer to enter a full range in the Dakar Rally with the Croco Adventures Team. The 250cc, 450cc, and 510cc started the event, with only the SR5.1i failing to finish because of a fall.

2012: The first bike with the name X-Ride is born. It is a 290cc 2-stroke model that blurs the lines between Enduro, Trail, and Trials motorcycles.

Since 1998 the brand has won more than 10 world championship titles in all categories.

A lot of the brand’s early success was brought by Graham Jarvis, who had a lot of success in Trials on a Sherco and then moved to enduro with Sherco.

He was a member of the 2001 Team Sherco Trial along with Josep Manzano, Marc Freixa, and Marcel Justribo.

2008: Jarvis won the Red-Bull Romaniacs on a Sherco.

Some of Sherco’s successful Factory Team Riders in Trials, Enduro, and Rally include:

Emma is a British Trials rider, born 29th October 1990. She started riding at age 4 and was a four-time British Youth Champion. Her international career started in 2006 with Gas Gas and then signed with Ossa factory in 2011.

In 2013 she signed with Sherco and in 2014 she clinched both the British Women’s Title and the FIM Trial World Championship.

Some of her achievements include winning:

In 2018 at the age of 21, Wade becomes the youngest ever winner in the history of the Romaniacs. The same year he achieved a hat-trick by winning Red-Bull Romaniacs, Red-Bull Megawatt, and the Sea To Sky.

Some of his achievements include winning:

Some of his achievements include winning:

Some of his achievements include:

Some of his achievements include:

When you consider the Sherco brand was only started in 1998, they have come a long way. Even more so when you take into account the other major Japanese and European brands have a history dating back to the early 1900s.

This young manufacturer has always punched above its weight, and in a short time has built a title-winning reputation in Trials, Extreme/Hard Enduro, and Rally.

Their competition success has translated into bike sales worldwide in both the 2-stroke and 4-stroke markets. Australia is now the biggest market outside of France.

When you look at this trajectory, it’s exciting to see where the next 20 years will take them.

Have you owned a Sherco Trials or Enduro bike? Please feel free to share your thoughts in the comments below.